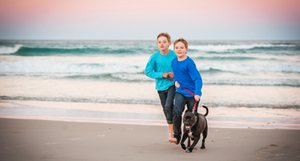 Anyone who’s ever tried to capture really terrific shots of children that do justice to their wonderful natural spirits doesn’t need to be told what a challenge it can be. Children definitely tend to have minds of their own and getting the best out of them on your own time frame can be difficult to say the least.

Studio settings in particular can really spell disaster for the wrong children on the wrong day. The studio is hardly a place that offers the excitement and stimulation children want and need. They can’t move, run, jump, or play. They can’t touch anything either, as there’s always the worry something might get broken.  What’s more, putting children in situations like that really doesn’t bring out the best in them and that can really show up in the portraits.

The key to success lies in choosing natural environments for your shoots that allow children to play, frolic, and otherwise be their wonderful cheerful selves. Such environments make for stunningly unique portraits as well. For me this is the heart of photographing children successfully.

Playing in the Park

Parks are more than just beautiful places that make great backdrops for successful shoots. They’re also set up perfectly for bringing the best out in children in a way that really shows up well on film. I like to bring a little bit of imagination into things, the better to create an environment where everyone is having a good time.

For instance, I love telling little girls to look for fairy gardens among the roots of some of the big, knarled trees you find in parks. Little boys respond wonderfully to the suggestion that there might be dinosaurs hiding out in the same hidden places. When a child’s imagination flares after a suggestion like that, it’s nothing short of magical… and if you can capture that on film, you have a memory to treasure for a lifetime.

If the children you’re working with are in a more rambunctious mood, you can always encourage them to climb on trees or other appropriate structures. Since this isn’t a typical setting for “having your picture taken”, children really warm up to the idea quickly and you can snag some priceless shots as a result.

Add Loved Ones to the Mix

Another thing that naturally brings out the best in a child is adding their parents or a beloved pet to the shot. I’ve gotten some wonderful shots of children captured while playing peek-a-boo with their parents or running through puddles with the family dog. Add loved ones and favorite games that can’t help but make a child smile to a fantastic location and you’ve just set the ideal scene for a shoot.

At the end of the day, the idea is to take the children out of their everyday environments in such a way that they’re no longer focused on the business of posing for pictures. They’re simply being themselves and everyone’s having a good time… including the photographer! What better way to make memories than by capturing genuine fun, happiness, and enthusiasm on film?

Best Ages to Get Portraits of Your Children (Part 1)

Best Ages to Get Portraits of Your Children (Part 2)