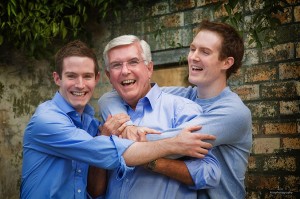 I meet some real characters..

from supreme court judges to the little old lady next door and fun surprises show up anywhere – particularly with kids!

I encourage them to let their hair down and just to behave like they would naturally at home.. and that includes all the political incorrectness, weird Dad jokes, funny embarrassing stories etc

This has the desired side-effect that some really crazy ‘off the record’ stuff happens!!

One day I was photographing 3x kids around the age of 4.

Four year olds can be a difficult to photograph.. 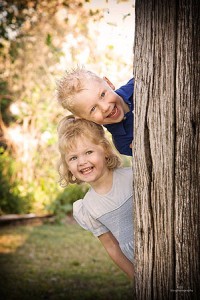 I was trying hard to get them to smile naturally, not the ones where they’re screwing up their faces with cheesy grins and tipping their heads to the side (with squinty eyes and their teeth showing).

You know the ones, they hold that position and then repeat it, it’s what comes naturally to them at that age.

So I asked their Dad, “What would you do to make them smile and laugh if you were at home right now?”

He said “All I have to do is fake burp, but it’s a bit disgusting..”

I said “don’t worry about me, please give it a try”

– it was hilarious, the kids were giggling hysterically.

All of a sudden these 3 little darlings had burst to life with gorgeous, genuine, natural timeless smiles.

Meanwhile Dad was going red with embarrassment, but I encouraged him to continue.

We were rewarded with the most beautiful shots ever.

Teenagers are the same..

– a similar technique works with them too!

I don’t use the word “smile” at photo shoots, because it makes people feel awkward.

But instead I get the parents to sing an old rhyme or slightly inappropriate song..

One mum had her teenage sons cracking up by singing one from their childhood, it was a crack-up!

It went something like “Don’t let your doodle dangle in the dirt..”

The teenage brothers went from feeling awkward and self conscious to instantly relaxed and we captured beautiful timeless images for them.

It was magic, this started a whole series of jokes and laughter and we had a great time together.

Another time it I was at the park with a family and their baby about one-year old. 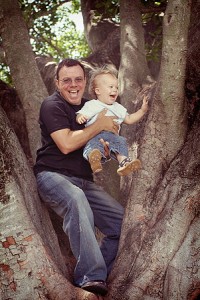 Bub was a bit cranky..

Dad and bub were kind of standing there a bit stiff and I encouraged them to loosen up.

He gave the baby a few lifts into the air and the baby responded by hitting him on the face!

So every family is different and you never know what is going to happen and it’s always fun.

One time a family brought along their pet rats!

We had rats crawling on their shoulders and this caused lots of squealing and crazy leaping about!

Do you have any hilarious portrait photo shoots that you remember?

Of course we don’t want to embarrass anyone, but those fun memories and stories are perfect for creating authentic family photography.

I’m sure you have little stories and ditties that you can reveal to get the fun flowing.

Talk to you Soon!

The Dos and Don’ts of Group Photography

Tips for Getting the Most Out of Reluctant Photo Subjects

Portrait Photography – The Camera Lies To You